Why Are There So Many “Buddhas”?
In chapter 6 of the Lotus Sutra, “Giving Assurance of Buddhahood,” Shakyamuni tells his disciples that they will also become buddhas, and he repeatedly gives them each the assurance of buddhahood. For example, Shakyamuni says, “This disciple of mine, Maha-Kashyapa, in future lifetimes will come to see, pay homage to, revere, honor, and extol three hundred thousand million world-honored buddhas.” He also says, “I now tell you that this Maha-Katyayana, in future lifetimes, will make various offerings to, pay homage to, revere, and honor eight thousand million buddhas.” For each of his disciples, he explains in particular detail the importance of making offerings to and revering buddhas.

For us, hearing that these disciples will make offerings to three hundred thousand million or eight thousand million buddhas—numbers so large we can hardly calculate them—may make us think this is a tale from another world.

The text says this will happen “in future lifetimes,” which must mean after one lives and dies repeatedly, and although we can understand this to be a magnificent figurative expression particular to India, it is impossible to think that we ourselves could do such a thing.

We often call people who have attained buddhahood, like Shakyamuni did, “buddha” or “honorable buddha” (and in Japan, people who are deceased are called hotoke, meaning “buddha”). This means that our model of “buddha” is Shakyamuni, which is one reason why we have difficulty understanding such an expression as “eight thousand million buddhas,” which indicates the existence of an enormous number of buddhas.

However, we can see this scripture in a completely different light when we read it from the viewpoint that, as a human being, the historical Shakyamuni accepted as “buddhas” all of the people he encountered prior to his awakening, the people from whom he received the teaching, and the people he came in contact with on his travels to share the Truth.

Therefore, when we emulate Shakyamuni and accept that each and every person we encounter in our daily lives is a “buddha,” then these lines of scripture almost become a task for our daily practice, don’t they?

The Basis of Making Offerings Is Consideration for Others
Speaking of seeing the people before our eyes as “buddhas,” Linji Yixuan (d. 867), founder of the Linji school of Chan Buddhism (known as the Rinzai school of Zen Buddhism in Japan), said the following to his fellow practitioners: “If you let go of the mind that seeks the Buddha outwardly, you are already a buddha. Therefore, all of you now before my very eyes who are hearing me expound the Dharma are none other than buddhas.”

If you realize that you yourself are intrinsically a buddha with a pure heart, then you are a buddha and so is the person before your very eyes. This is no different than believing and accepting that “everyone you encounter, without exception, is a buddha.”

I often hear that although people can readily put their hands together reverently before the dead, they can hardly do so before the living. But because people who have died and people who are living are all “buddhas,” the practice of making offerings to people before our eyes with the feeling of “revering, honoring, and extolling” them is hardly something strange, but rather something quite ordinary.

What then, in concrete terms, should we do? The most important thing in making offerings that express our sincere gratitude to the Buddha is putting the teachings into practice. Through practice, we fully realize that the teaching is the Truth. We go through each day with a mind of compassion like Shakyamuni’s. In simple words, we hope that people’s sufferings and concerns will decrease and their joys will increase, and we show our consideration for them.

Doing so is an offering to the “buddhas” before our very eyes and, by extension, an offering full of reverence and gratitude toward Shakyamuni, the Buddha, who—through his accumulation of practice and diligence—revealed the Truth to us. In this way, we become human beings overflowing with consideration for others, which in turn leads to our coming closer to buddhahood.

Each and every one of us is like a piece of fabric—a wonderful piece of fabric that has the qualities of becoming a buddha. When this fabric is backed with the lining that is our practice of compassion—our consideration for others—it forms the most splendid robe: that of a “buddha.” 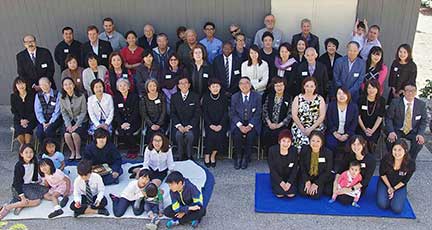 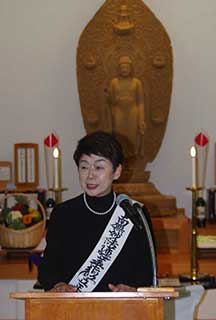 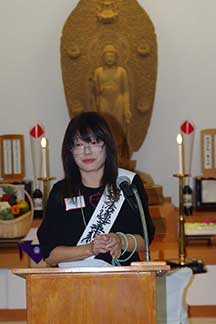 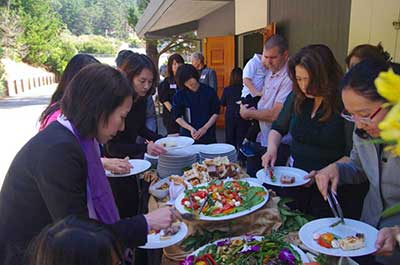 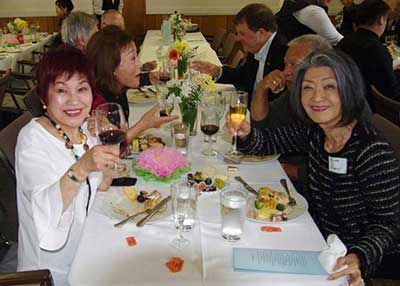 The Dharma Center in Pacifica’s 40th Anniversary was celebrated on September 29th with a special service and catered luncheon. Reverend Noriko Nakamura, Director of Dharma Education and Human Resources of Rissho Kosei-kai in Tokyo was our guest of honor. We also welcomed Reverend Ken Nagata and Mr. Itsuo Fujii from the Rissho Kosei-kai International office in Los Angeles.

Reverend Nakamura gave us inspiring guidance on how her life was transformed by approaching life through Buddhism. As a young adult, she was hampered by asthma but after she let go of her attachment to be cured of her condition and focused on helping others, she realized how she was helped by many around her. Seeing life through Buddha’s eyes opened up the world beyond herself.

As you can see, a great time was had by all with good food and good cheer.